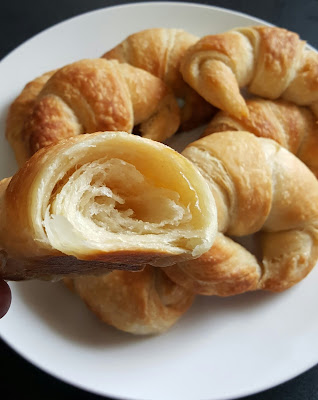 I have seen some lovely croissant recipes, but they take days to make. I am a very impatient person and I also do not have the time to spend days on a recipe. It would mean not cooking anything else hahaha.

So I went in search of a recipe that could be done within a day and then set on veganising it.

When I was making challah last week, I came across "The Bread Kitchen". The lady that owns the channel is so charming, and although it is not a vegan channel, she has quickly gained me as a fan.

I watched a few recipes from other channels, and got some ideas from those also. Titli Nihaan's recipe is done by hand. I wanted to make mine in the bread maker, so that when I was making the dough, I could also work on something else (seitan steaks).

So it is 100% possible to make this by hand, the bread maker is absolutely not required.

I will explain the recipe as I made it, and then you can see Nihaan's method for making the dough by hand, although those of you that make bread, the method is the same.

Some notes on the ingredients.
I decided to try a homemade Bread Improver as per this recipe. This is because the commercial bread improver is hard to find, and even harder to find a vegan version. I also thought that making it from scratch would make it a lot easier for everyone to follow the recipe.

I used Nina's Vegan butter made with aquafaba. I would suggest that you make that first, as it does take time to set. I made it as I was making the dough and in between other things, so it was quite soft when it came to put it on the dough. It obviously still worked, but I don't think it is ideal.
I recommend making the butter with deodorised coconut oil. I didn't have any, and the coconut flavour is very noticeable. The taste overall of the croissant is great, but they would be better without the coconut flavour through it, as it would taste more legit.

When you make the butter, do not set it in a container, spread it onto some parchment paper on top of a baking tray or a plate. Spread it to a large square size, about 1/4 inch thick. Cover it and put it in the freezer. Then set to making your dough.
I didn't use apple cider vinegar in the butter recipe, but citric acid. I don't think this makes a difference. I also didn't add any colouring (tumeric) as the butter was for the croissants and it didn't really matter what the colour was. 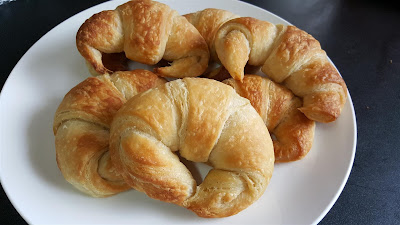 Pasta frola is a tart made in Uruguay and Argentina, traditionally filled with softened quince paste. I have been making this tart all my ... 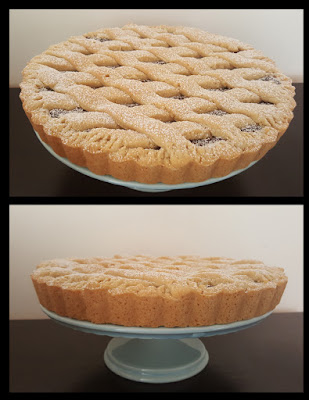